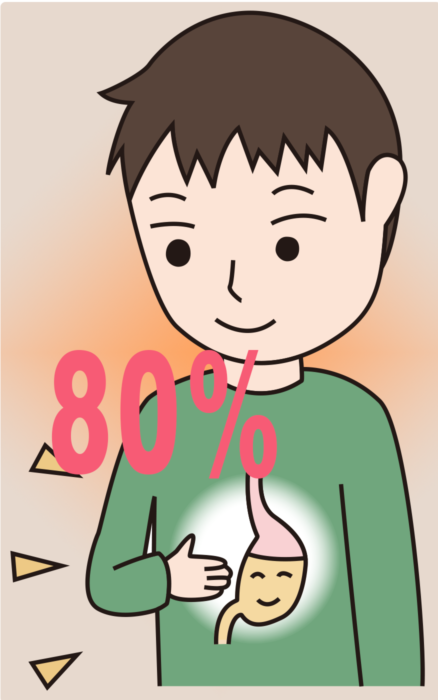 The idiom “Hara-Hachibunme” in Japan means “80% full” as a healthy eating habit. They say You don’t need a doctor if you keep “Hara-Hachibunme.” A similar saying in English will be, “Light suppers make long life.”
Since the 1980s, many countries have been scientifically investigating why “Hara-Hachibunme” is good for your health. This study compares the life expectancy of small animals such as rats between a group that eats a limited amount of food and a group that eats as much as it pleases.
For example, in one study conducted in Japan, the average lifespan of mice fed all-you-can-eat was 74 weeks, while that of mice restricted to 80% of their diet was 122 weeks, more than 1.6 times longer. (*1).

juveriente.com
How can I restrict eating at Hara-Hachibunme (by 80% full)?
Do you think it's hard to take the restricted eating into your life? Find the easy tips here and try them today!

Since then, various studies have confirmed that the “Hara-Hachibunme,” constant restricted eating, can slow cellular aging. They point out that 80% of the stomach is effective in preventing cancer caused by dysfunction of cells, vascular disorders caused by arteriosclerosis (high blood pressure, stroke, myocardial infarction, etc.), and many lifestyle-related diseases such as diabetes.
An American study on monkeys, which are more similar to humans, reported that a 30% calorie restriction (at the 7th minute of the abdomen) improved body fat, blood pressure, blood sugar levels, triglyceride levels, etc.

The same benefit for human

So, does the benefit of “Hara-Hachibunme” apply to humans? There is an interesting report about this.
Since 1991, in the United States, a survival experiment has been carried out in which eight researchers live a self-sufficient life in a dome called Biosphere 2. Initially, it was an investigation related to space development, premised on living in an artificial environment called a dome when humans migrate to a planet other than Earth.
This experiment failed in its original purpose, but on the other hand, there was an unexpected by-product, regarding restricted eating.
The low harvesting yield in the dome limited the researchers’ diet by 25% less than their planned meals. The daily energy intake was about 1800kcal. As a result, not only did they lose weight, but almost all values ​​related to lifestyle-related diseases, such as blood sugar, cholesterol, and blood pressure, also decreased.

In this way, they found from monkey studies and reports in Biosphere 2 that “Hara-Hachibunme” (restricted eating) may extend not only life expectancy but also healthy life expectancy (healthy period without disease). (*2).

(*2) Professor Emeritus Roy Walford of the University of California, who participated in the Biosphere 2 project, later focused on the relationship between calorie restriction and health and proposed a diet menu that would prevent malnutrition even with calorie restriction, etc.