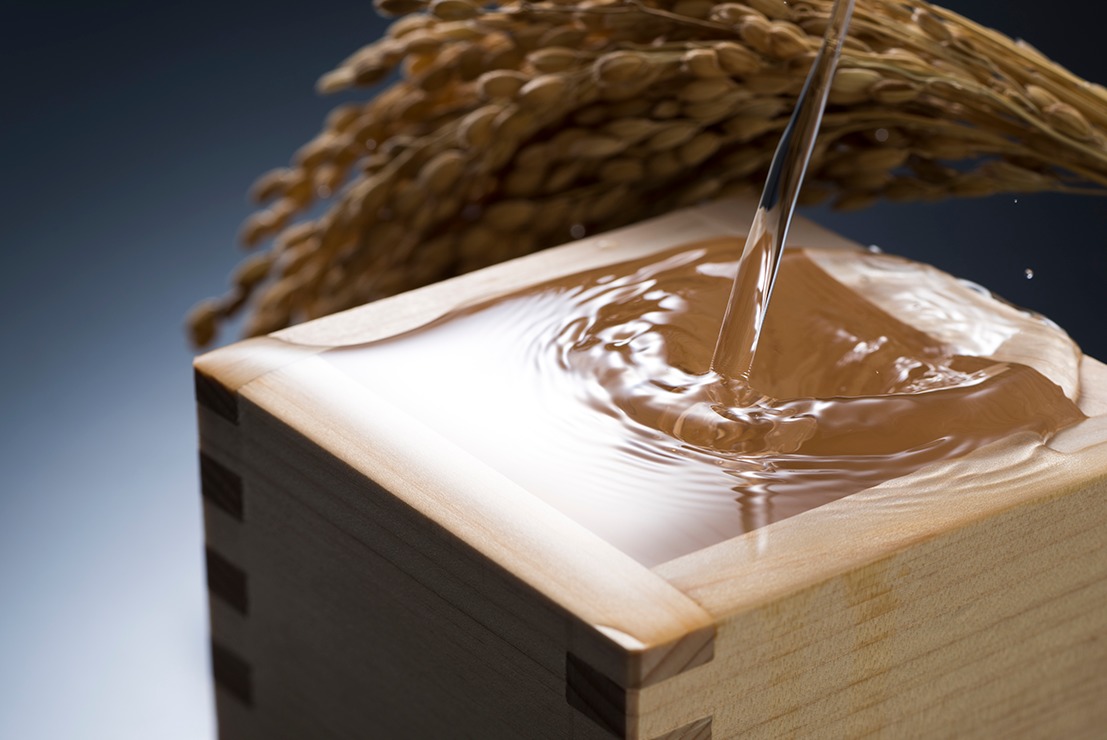 Sake brewing passes through complicated processes. The sake master (Toji) needs to take care of each point in a delicate manner. It requires high expertise and continuous carefulness all through the processes.

I try to explain to you the key points of such a complicated brewing.  It may be interesting but maybe somehow lengthy for you. You don’t need to read it through if you don’t have time or are not interested in such details.

The summary and the most important thing to know is that such complication enables Toji to make up the premium sake’s delicate taste and flavor without leaning on a fortune called “great vintage,” but only on his expertise and technique.

On the other hand, it also means sake sometimes falls into a terrible quality if the brewer neglects such carefulness to save operation costs.

If you are new to Japanese sake and enter the world of beautiful sake’s art, we commend you to start with brands already known to have premium quality like SOTO or Dassai.

www.sotosake.com
SOTO SAKE
SOTO sake is an approachable super-premium product with a clean, smooth taste that captures the rice's natural sweetness and the soft texture from the delicate water of the region.

Lack of temperature management in international logistics often damages even sakes, which are considered great in Japan, their origin country. Still, these two brands are brought to you even in Western countries under their careful temperature control.

It will be a tragedy if you try a terrible sake at first and walk away from the potential valuable experience without knowing the real beauty of sake.

Anyway, if you have a little time and be interested in the venture of the sake world, continue to the following.

The Basics of Sake Brewing

By the way, what is so complicated, and how a Toji (sake master) manages it with his expertise and techniques?

The points we explained in our previous post are as the followings.

The actual works and phenomenon to reflect the above principle in the actual brewing is the following.

What are the challenges?

The subjects to handle in this procedure are live microorganisms. The reactions vary every time. Also, the two different lively responses will weave a far complicated and unforeseeable flow. Even the right set of brewing conditions will never guarantee the right product. Toji, the sake master, observe the liquid surface and add delicate adjustments in need based on his expertise and technique.

What they actually do in their operations and managements

To implement the above conditions, the main thing that Toji, the sake master, does is to balance the saccharification (starch-to-sugar fermentation) and the alcohol fermentation in their speeds.

The following multiple factors always fluctuate, respectively, and change and require the best expertise of Toji, the brewing master.

Toji uses thermometers but makes his judgments at every critical point, eventually based on the traditional method. He finds what he should do by observing the liquid surface with full of his five senses.

As one of the principal methods, they input the ingredient set little by three times. It is called “three steps input.” When they input a portion of the ingredient set, it will dilute the yeast concentration and the tank’s acidity. Too much input will make them too low and give unwanted bacterias the room for multiplication.

Narrow Target of the saccharification speed / never too fast and never too slow. 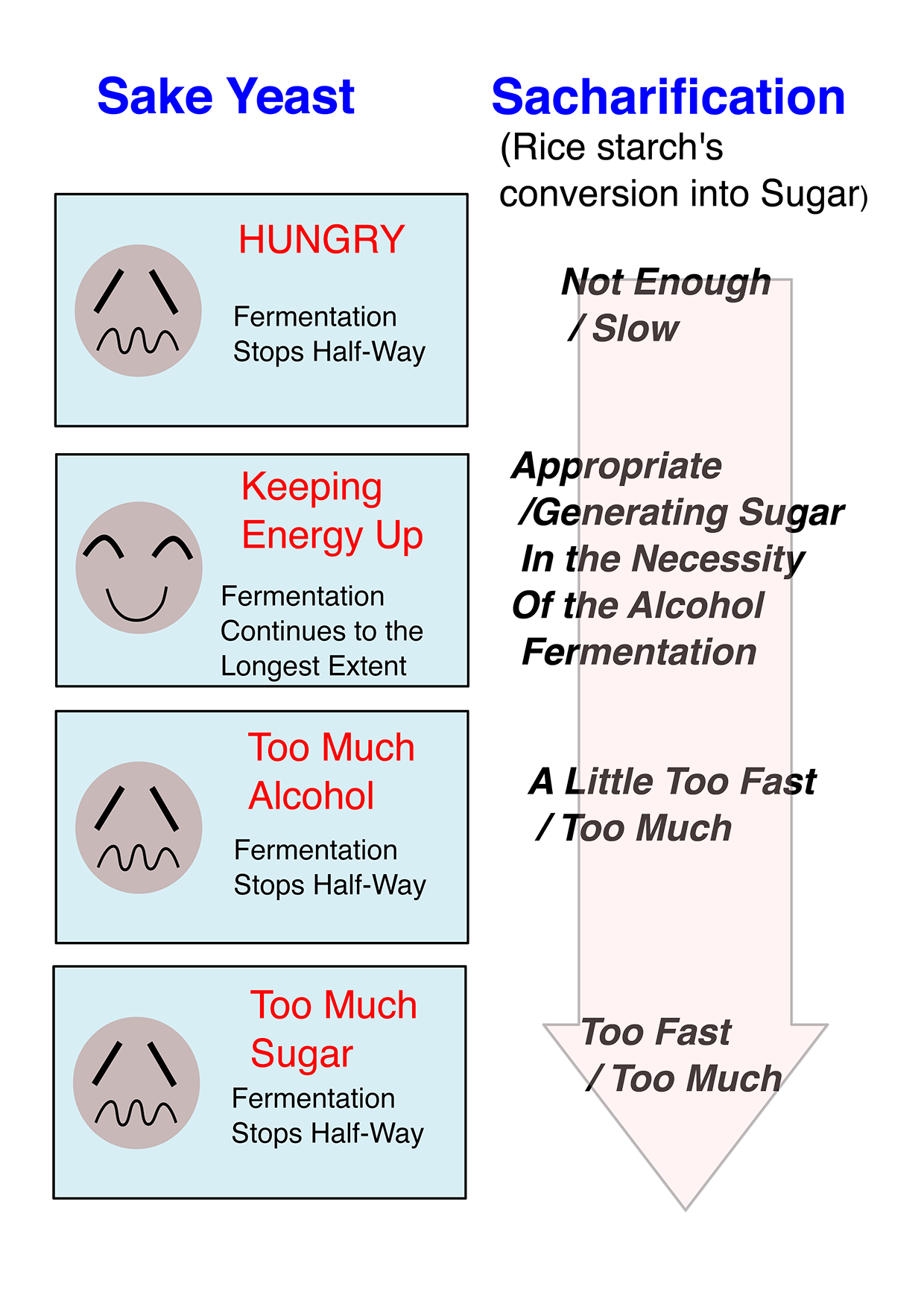 The followings are the major factors to affect the saccharification speed.

Such temperature control will directly affect the saccharification and the alcohol fermentation, as explained earlier. 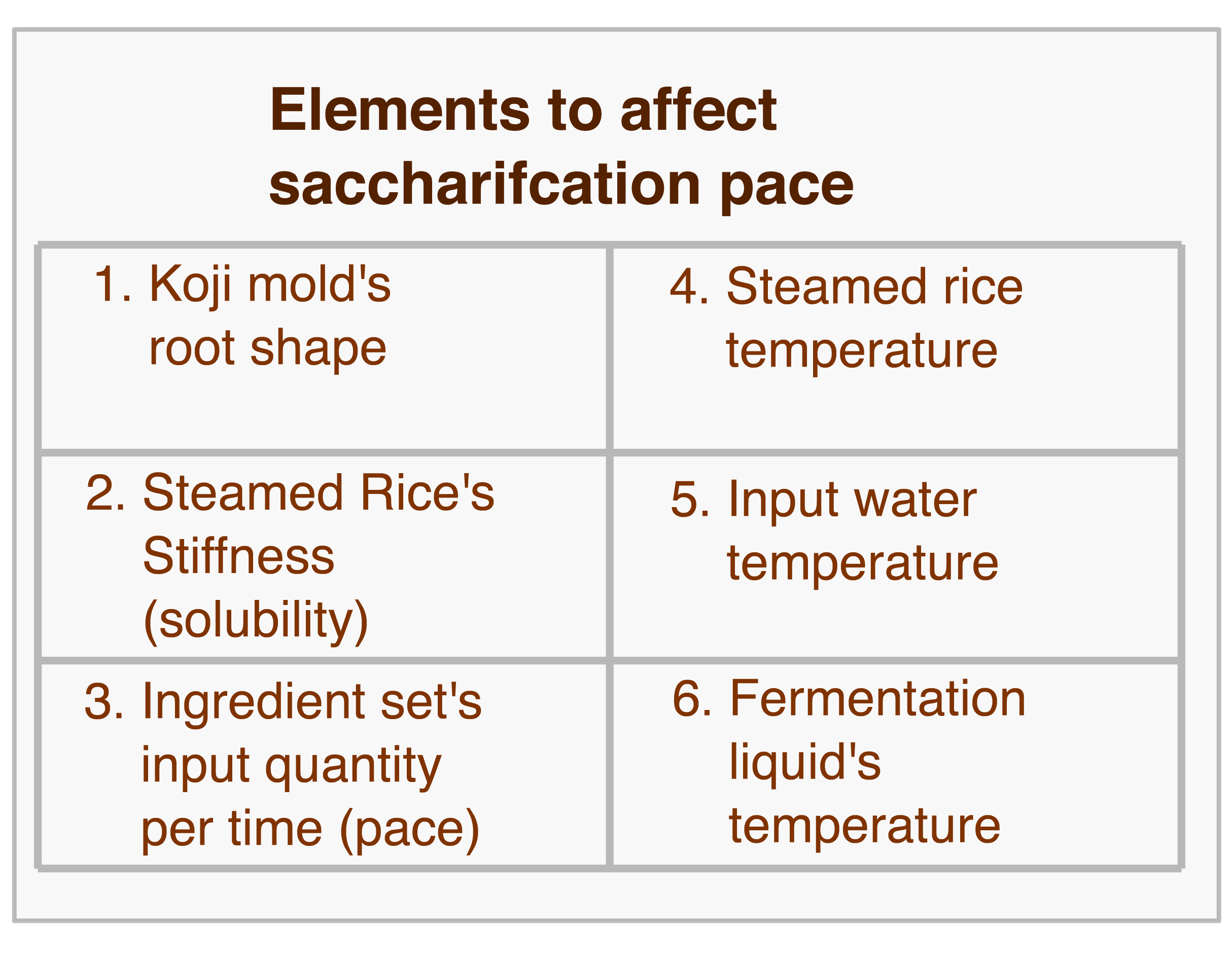 Many other critical points affect the above matters in other processes like rice grinding, rice steaming, etc. They also require fine expertise in detail. We don’t write about them here, but you already know how sake brewing needs the expertise of sake masters and careful control.

In such a way, beautiful sake is made beautiful. Try a premium sake with such careful brewing and, don’t forget, shipped with careful temperature control.

P.S. How they make the yeast predominant at the start?

I explained that they need to keep up the high concentration of sake yeast in the fermentation tank. By the way, who do they start it? Do they purchase a liquid full of cultivated yeast? No. It was impossible in pre-modern while sake brewing procedure was already established.

The answer is that they do a similar fermentation in a tiny tank with a small volume before going to a big tank. This process’s main purpose is not alcohol fermentation (though it arises as a result) but the cultivation of the sake yeast. It’s much easier to control the environment in a small tank.

The sake yeast is not predominant here at the start. So they raise the acidity by lactic acid secreted by lactobacillus. The high acidity will prevent unwanted bacterias from multiplying, and the protected yeast increases. The sake yeast will generate alcohol through its multiplying (= alcohol fermentation). The heightened alcohol percentage will kill the lactobacillus, and eventually, only the sake yeast remains predominant.

This starting liquid is called “Shubo,” which means sake’s mother liquor. They carry the mother liquor into the main fermentation tank and add the ingredient set by the “3 steps input,” as explained above.